In my last lighting blog I promised to provide real data on real projects and I have one for you today.  At Toronto General Hospital, Henry Gomolka (TGH’s lighting guru) has recently finished the installation of daylight and occupancy sensors in the in the lobbies of the Munk patient elevators (floor 3 to 12).  These sensors will shut off the lights when the space is unoccupied or when there is sufficient daylight in the space.  I’ll get to the details in a minute, but I want to share some of the results first.  Also, if you want an introduction to the control types, I have a quick primer at the end. 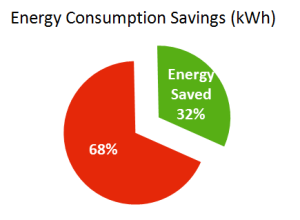 Initial Results
To get the results I setup a light logger to see how much energy we’re saving with the occupancy and daylight control.  I don’t have a large sample size yet, only a week on one floor, but the data gives us an initial impression and shows encouraging results.  Below I have a few graphs, the first showing the on and off times on the fourth floor with the occupancy and daylight sensors connected (white means lights are off, red means their on). The next graph is for illustrative purposes, to show what the profile looked like before.  What we found was an energy savings of approximately 30% last week.  Further, by reducing the time on, we also extend the life of the bulbs, thereby saving on disposal, new bulbs, and maintenance time.

What did we do?
Retrofitting an existing space for new controls is typically more difficult than designing it in a new space because it requires wiring you don’t currently have.  So in this application we used a new wireless sensor and control system from Lutron.  It consists of battery powered occupancy and daylight sensors that communicate wirelessly with a ‘powerpack’ which turns the lights on and off.  Note that three of the lights in each lobby are on emergency power, meaning they are not able to be shut off by code.  So if you see them on, you’ll know why.  The sensor batteries last for 10 years and have LEDs that flash red when they need to be changed.  So far we found the system simple to install, relatively low cost, and functioning well.  As a result we have begun to selectively expand to other areas of the hospital.  The corridors between Munk and NU are underway; if you see Henry working there, please say hello.

A Quick Primer on Occupancy and Daylight Control
Occupancy and daylight control are becoming common practice in lighting today, but there are a few key considerations to getting it to work properly.  Here’s a quick background to get you started; there’s a lot of good information on the internet so I won’t go into too much detail.

How to select the right sensors:

How to install them: