My wife and I were looking for a home in the hot Toronto housing market, but we had been having a rough go of it (bidding wars, hidden problems, outright lies, etc). So when a little two story semi-detached house became available for rent just down our street, we grabbed it. We moved from our tiny one bedroom apartment to remain as renters for a bit longer, just a little more comfortably. As both of us are sustainably inclined we still wanted to make it as energy efficient as possible, but what is a renter to do?

Since it’s an older home it’s not the most energy efficient, but we’re not likely to change furnaces, or windows, or add wall insulation. So this story is more about tweaking what we have, and implementing what’s inexpensive or what we could take with us. We went through a bit of a checklist, some of it we noticed before we moved in, some of it after.

Chronicle of the Investigation:

If I had kept a journal of this little investigation, I expect it would go something like this.

Day one and I awake to a chill in the air; I can nearly see my breath. A gentle breeze is coming off the large cold bedroom window, reminds me of the ocean, without the salt or tranquility. The incandescent lights are staring at me, laughing as they burn away my kilowatts. The furnace turns off and on, off, then on, again and again, the ill-timed rhythm walking on the wrong side of infuriating. Ahh, welcome to our new place.

This just won’t do. Time to start the checklist.

Doors: Check. Good start, they do exist. Actually it gets better, the door has a door sweep and the door seal is extremely airtight (snugly weather sealed). No drafts in here. 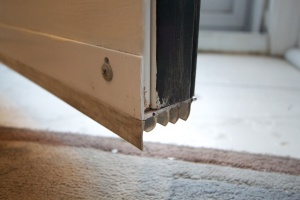 A good seal is obviously important for exterior doors, but also look at the doors to the basement, as they can be prone to drafts. I’ll need to add one to the basement door; it’s cold down there.

Windows: Not bad. The larger windows seem pretty new and don’t have any signs of leakage, such as moisture on the inside, and there aren’t any cold drafts around the windows.  Many of the smaller windows are of the sliding variety, which raises a red flag. Sliding windows are notorious for poor performance (hard to seal). Surprisingly though these ones are pretty good. They are double windows, sit extremely snug in their frames, and seem to have imperceptible air leakage with a cold but reasonable frame temperature. Still next year I’ll put the heat shrink plastic layer over some of them.
Another side note, wall outlets can be bad sites for drafts. There are sealed units so it’s something to consider.

Lighting: Incandescents everywhere! Literally everything is incandescent or halogen, or I should say ‘was’, since I’ve already fixed that. In the living room there were seven Par 20 halogens at 50 Watts each for a total of 350 Watts. I replaced them with 5 Watt LEDs (that’s 90% energy savings!!!). 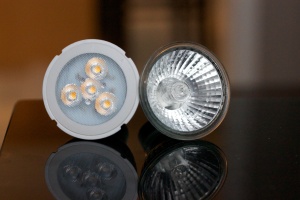 I also replaced GU10 halogens in the kitchen and hallway with LEDs. For the other areas, like the Den and Washroom, I used some old CFLs that were just waiting for a home.   There are a few other areas, such as a guest bedroom, storage room, etc, but we barely ever use the lights in there so they can wait.

Furnace: The Furnace is good. The control is not.  The Furnace has an EnerGuide AFUE rating of 95. AFUE stands for Annual Fuel Utilization Efficiency and this means that 95% of the fuel ends up heating our home, the other 5% is lost out of the exhaust. It also has a variable speed fan. It’s as good as you can get for a non-condensing furnace, with those units maxing out at 98%.

The control however is a 1980s ‘vintage’ mercury filled thermostat. There’s no reset control unless I do it myself, which I’m remedying with a programmable thermostat. It’s also in a terrible location, right near the warmest vent so the temperature isn’t really indicative of the house temperature. This also causes the furnace to short cycle, on, off, on, off (sigh). 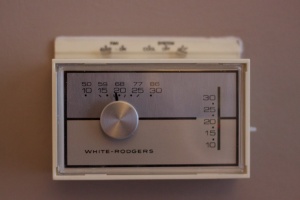 I’m still tweaking the temperatures but when we go to work I have it resetting down to ~ 15degC, at night ~17degC, and when we are home ~20 degC. The living room also has a fireplace that we use to directly heat that area, which is the most frequented in the house.  The bedroom is always a few degrees colder but I’m still trying to resolve that (next section). Once I get is all working I expect to save 10% or more off my heating and cooling bills.

Ductwork = …… the ductwork in this house looks like a bunch of writhing snakes. That means lots of pressure drop, high fan energy use, and poor airflow distribution through the house. When we moved in the system clearly wasn’t balanced at all with almost all of the air was coming out of one diffuser by the front door. This diffuser also happens to be right across from where the return grill is and right near the thermostat. In this configuration I’m not getting the benefit of the heat the furnace is producing.

I’ve already taken steps to balance the airflow using the dampers built into the diffusers. I’ve also turned the diffuser upside down so their air blows up and away from the return and I’ve blocked off over half of the diffuser in the hallway (using a high tech solution, folded tinfoil). The temperature distribution is already better. Time to go looking for leaks: 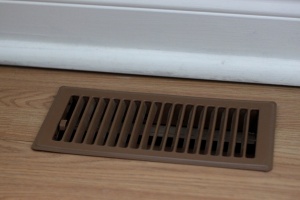 Adjust these diffusers to get better air distribution (close some, open others)

There are leaks in the ductwork and an open diffuser in the basement, which is basically stealing heat from the living room. I don’t know why the diffuser is there, there aren’t any cold water pipes, it just in the very back corner all alone. I’ll have to check with the owner about that one, but for the leaks it’s just a matter of buying some aluminum duct tape.

Unfortunately the flexible duct that’s connected here gets almost zero airflow. Air doesn’t like to turn 180 degrees but I can’t really straighten this duct run. Don’t let this happen in your home, you might as well not even have that diffuser; it’s not getting any air anyways.

Hot Water Heater – The water seems hot, but I need a thermometer to tell how hot. I want to prevent legionella but I don’t want to waste money. The dial on the side isn’t very helpful (what is warm? Seriously how does that help), so I need to get a bucket, fill it carefully and measure the temperature, turn it down, and do it again. I’ll let you know when I’m done. 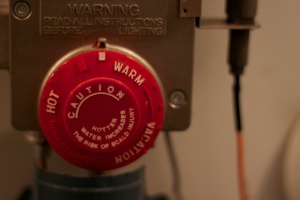 Okay so the temperature is ~50degC.   Now I was under the impression that you needed to keep the water above 60degC to prevent legionella bacteria from growing. That’s what you do in commercial buildings. But it seems that everyone from BC Hydro to the US Department of Energy are recommending temperatures a bit lower. BC hydro recommends 55 to 60 degC, while the US DOE recommends 50degC. I’m going to put it to 55degC for now and do a little more research.

Also the piping to and from the water heater is missing some insulation so I’ll buy a few feet for that.

Fixtures/Showerheads: So much waste and… opportunity. The showerhead is 9.5 Liters per minute (very poor), and the bathroom faucet is 8.4 Liters per minute. If there were more than two of us we’d certainly be running out of hot water. I can get a new showerhead comfortably at 3.8 Liters per minute (~60% less water), and a 1.9 L/min aerator for the faucet should be fine.  Note that the flow rate is typically written on the fixtures.

Assuming one five minute shower a day for each of us, that would save $40 a year in water costs alone. There are also gas savings which I’m sure are substantial.

The toilets use ~16 L/flush, based on the tank volume. Yikes. I don’t really want to buy a new one so maybe I’ll just fill a couple balloons with water and put them in the back, or buy something purpose built, we shall see.

I’ll post again once all the measures are in place and compare the before and after energy use. In the meantime if you have measures you’ve done at home, please put it in the comments section below. Also for more information on tips to do at home check out the links below, and there’s a footnote on the electricity rates.

1 Rates: Note that you are charged $/kWh for your use but the ‘distribution charge’ also has a variable component. About $19 is fixed and you can’t do anything about, but for me about half of my distribution charge is variable. The result was that my rates for the first month were ~$0.095/kWh for consumption and ~$0.052/kWh for the variable demand component.