Have you ever imagined hospital shutdown in the middle of summer?  It is possible if one of the critical equipment is not functioning due to various reasons.  Typically those issues are associated with waste of energy.  As mentioned last time, almost all the heat removed from the hospital is rejected to atmosphere via cooling towers.  If the cooling towers are malfunctioning, the whole cooling system will be in trouble and shutting down the hospital is inevitable.

Extended chiller surge can cause damage to compressor seal, bearing, impeller, shaft and driver or even catastrophic failure and all those start from the cooling towers. The cooling tower supplier was contacted to inspect the cooling towers and identify the root causes.  They found that the original spray nozzles are too small and they got clogged easily.  There were also scale buildup on some of the fill media and damage to the fill media due to water erosion.

Figure 1 Scale, rust and debris removed from one of the distribution pipes during the tower repair project. 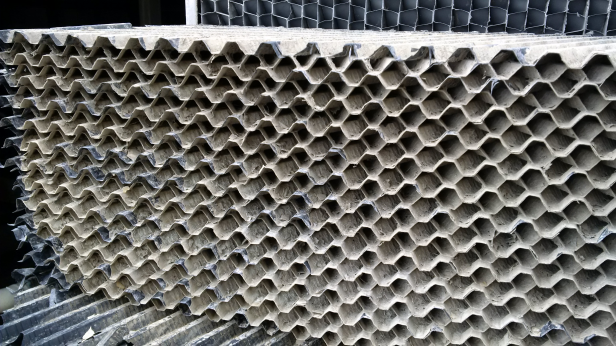 Based on the inspection report and our own observation, we created a scope of work to repair the cooling towers.  New nozzles with much larger opening and new fill media would be installed.  One of the measures we added is from our maintenance/operating engineer Betrework Wondmeneh (his photo can be found here).  He noticed some of the broken fill media and splashing baffle pieces ended up inside the chiller condenser tubes.  The strainers on cooling tower sumps and condenser water pumps were not working properly.  He replaced pump strainers but for the sump strainers there is no ready solution since the existing design of fasteners holding the strainers appear to be weak and there are always water turbulence in that area.  Drilling new holes on tower body for strainer installation may cause water leakage.  After some trial he got this great idea of installing steel rods on top of the strainers and proved it works well.  A round rod will not pick up the force from water turbulence and will hold down the strainer in the right location.

Fortunately the Energy & Environment team received approval of more retro-commissioning funds because of great success in the past.  A construction team was assembled and the target is to complete the full scope of work before the cooling season started.  We started from the cooling tower that was in worst shape.  After it was opened up and some of the damaged fill media on top was replaced, it was noticed that there was heavy scale buildup on the rest of fill medias.  A water treatment company was called in to do chemical cleaning.  After two tries, the results were still not satisfactory.  To make it right, all the fill medias on this cooling tower were replaced.  This was quite some change on scope of work and finance, procurement and even higher management were involved to approve the change within a couple of days so that we can complete the project by the deadline.  The cooling tower repair company, chemical cleaning company and UHN worked seamlessly as one team.

Eventually the project was done before the cooling season started and all the cooling towers have been performing well.  Possibility of chiller surge was eliminated and costly hospital shutdown was avoided.  Electricity demand profile shows that under similar weather conditions (84°F outside), we saved about 633 kW when compared with that from about one year ago.  It is estimated that total of $31,600 will be saved per year – another successful energy retrofit project.

In the end of the day, Betrework can concentrate on something else important: “Since the completion of the repair work on the 3 cooling towers, the chillers are working smoothly without surge.  The water coming from towers is cool between 78°F and 86°F in summer and I am sure there is no more broken fill media pieces going in the system because of the rods and new pump strainers.  I’m closing this cooling tower repair job.  It was the best for improving the operation of cooling system of TWH. Well done!”