Most of us don’t think much about how we get our water.  It’s almost always available and relatively inexpensive.   For the vast majority in Canada it’s just one of the great benefits of living here.  However, the result is that we Canadian’s are not very good at managing our water consumption, as you can see in the graph below.

There’s a pretty clear inverse correlation between the price of water and the consumption of water.  It makes sense.  Generally the more something costs, the more careful people are with it.  That’s pretty similar to how we manage electricity too.

Our domestic water requires both water treatment and power for pumping.  Old pumping system were generally very inefficient designs because electricity was cheap and technology was expensive.  That’s one of the problems we had with the old domestic cold water booster pumps at Toronto General Hospital.

For tall buildings pumping of domestic water is essential.  The water must be boosted in pressure so it can reach higher floors and be supplied consistently to equipment.   For a hospital, such as Toronto General, ensuring water is available and reliable is extremely important.   Patients, procedures, tests, and sensitive equipment all rely on it.  It also takes a lot of electricity to pump all that water to meet the hospital’s needs.   So in looking at the old systems and the new options available, it was clear there was a great opportunity for UHN to replace all four existing domestic cold water booster systems at TGH.

The first two in the table, those in the Eaton and Peter Munk buildings have already been replaced, while RFE and NU pumps are underway.  I’m going to go into the details of the Eaton installation as I have measured data for that area.  Once the whole project is complete I’ll provide an update.  This is a great project so thank you Kaylen Bartoshewski for leading the implementation!

The Eaton domestic cold water booster system was originally installed with the building, in 1978.  That means those pumps were older than I am.  Originally they consisted of three 30hp pumps, but one of those three was replaced long ago with a 25 hp motor.

Originally there wasn’t even emergency power for the pumps.  So if the hospital lost power, it also lost water.  At some point, a forward-thinking individual was able to connect one of the pumps to emergency power.  An improvement, but if that one pump failed, or was down for maintenance, again there would be no domestic water for the building.  That was just how hospitals were designed back then and obviously no longer acceptable.

The pumps were also constant speed, with single stage impellers, and pressure reducing valves.  That’s incredibly inefficient, much like driving your car with your foot on the gas and the brake at the same time.

The new pumps are stainless steel, variable speed control, with multi-staged impellers, and increased monitoring points.  As a result of the multistage impellers, the new pumps don’t need as much power.  The motors are smaller and the hospital saves on electricity costs — the variable frequency drives are a big part of the electricity savings too.

Each pump has a 15 horsepower motor (half of the old motors), but instead of three pumps we selected four.  The reason for that was to improve redundancy.  Only two are ever required to meet the peak demand of the building., so if one pump fails or needs maintenance, there still another for backup.  That’s referred to as N+2 redundancy and is 50% better than was we had before.   The smaller motors also means less expensive replacements as equipment ages.

With the new system we also included a manual transfer switch to go from emergency power to normal power and back.  That’s in case one of those systems needs maintenance done or a shutdown for a new connection.  Now, when that happens, the system won’t need to shut down.

We also ensured the new control panel wasn’t a single point of failure.  If the control system were to fail, the pumps would continue operating on their own VFDs.  That control system also allows for much greater monitoring of the system.  Pressures, power, and alarms, are all provided to the building operators and trended on a server for analysis.

The installation work was more complex than a typical commercial site (it’s an operating hospital).

Maintaining water to the hospital was very important and not just because of the hospital’s functions.  Infection prevention (IPAC) was a major consideration in planning.

In a shutdown of domestic water systems, material is able to flow back into the system(from faucets and sections of pipe that don’t seem much use.  That brings an opportunity to draw bacteria into the water supply, where it can grow.  There’s also a pressure wave upon restart which can dislodge material in the piping.  To avoid that issue, we installed a temporary pump.

First we cut into the domestic water piping upstream and downstream of the pump, while the system was running.  That process is called “hot tapping”.  We then installed valving on the new connections and connected a temporary booster pump, which could operate while the new system was installed.  A lot of prep work was required ahead of time so that this could be done in one night.  The neat thing is that those connections will now remain, in case they are needed again.  I’d recommend all hospitals install temporary connections like that right when the hospital is first built, the incremental cost would be minimal.

Another IPAC consideration was in the installation process.  The installers cleaned and sterilized each part of the pump system before it was installed, which ensured no dust or other contaminant was introduced into the system during the installation.

Prior to any design work we first metered the pressures, flow, and power consumption of the original booster system for two weeks.  That gave us a great understanding of how the system regularly operates and how to design the new system.  Other calculations were used to compare and a safety factor was applied to the resulting recommendation.  That audit was also 50% funded by Toronto Hydro through the Save on Energy program.  Why?  Because there are big energy savings.

The first thing to note is that the operating pressures of the old system jumped around, a lot.  That’s because the pumps were constant speed, but the load was variable.  The system pressure is impacted by both the incoming city pressure and the amount of water being used at any given time. The result was that supply pressure to the buildings varied by ~40psi (graph below).   That’s like pungling deep into the ocean, 100 feet at a time, underwater and then up to the surface, repeating again and again.

The old pumps were also extremely inefficient in maintaining their pressure.  That’s exhibited in the graph below.  It shows that even though the demands on the system changed, the power used by the pumps was relatively constant.

The first thing to notice about the new pumps is that they provide a much more stable operation (also note that the durations sampled in both graphs are the same).  Supply pressure was typically maintained ~135 psi, with peak swings less than half of the old system.  The graph also shows that even though city supply pressure remained highly variable (light blue line on graph), the new pumps controlled well to meet supply pressure requirements (purple line on graph).

The other thing to note is that the power requirements of the new pumps (yellow line below) tracked extremely well to the inlet pressure (blue line below).  When inlet pressure went up, pumping power went down, thereby saving in operating costs. 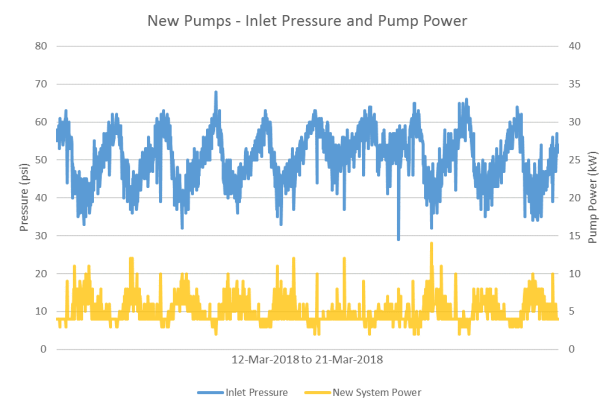 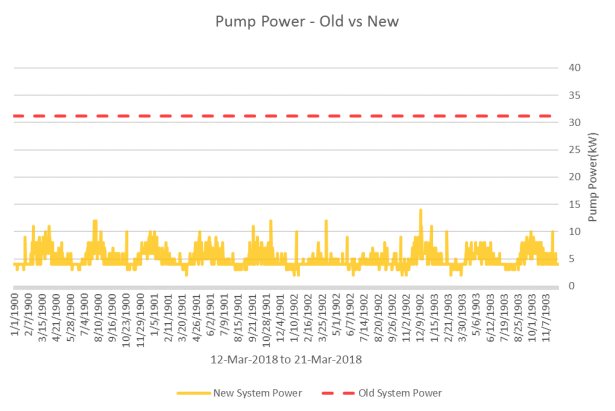 The new domestic cold water system at Eaton has a number of benefits.

The new pumps are seeing an electricity savings of approximately 84%, translating into ~$35,000 a year.  If the system operates for at least it’s expected life of 15 years that’s half a million dollars in savings. 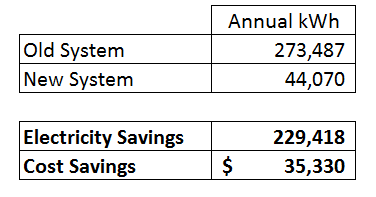 Once the other systems are complete we’ll report on those projects too.