Originally, this was just going to be a quick piece about the changes to the TTC VIP program, but then something bigger happened. So that we’re covered, the TTC VIP program, the crowning jewel in our sustainable transportation crown, with over 2.6 thousand UHN participants, is coming to a close. The TTC has chosen to end this particular bulk purchasing plan in December 2018 (or, um, now).

Before I shake my fist in the air, it turns out the TTC hasn’t so much ended this as switched it to PRESTO. If you are on UHN’s or another workplace VIP program, you may even get a complimentary PRESTO card. This make the whole program a lot easier, and with some sweet savings. This version also requires a 12-month commitment, costs $134 per month and provides the same unlimited travel. More here.

Or skip the commitment, load your PRESTO card with cash and pay individual fares. The upside here is you can use the 2-hour transfer … hop on and off the system within a 2-hour period without being charged another fare.

COP24 is happening this very minute in Katowice, Poland! Reps from around the world are meeting to talk (and act) on climate change on a global scale (gotta be global since climate change doesn’t really get the whole national or provincial borders thing). You probably remember COP21 in Paris, and the landmark Paris Agreement? All the more relevant now.

Why are you talking about COP24 on a TTC post?

Because the biggest cause of climate change is us humans burning fossil fuels. And the biggest burn source in Ontario comes from transportation. And when people switch from driving gas-burning SOVs (Single Occupancy Vehicles) to cleaner substitutes like public transportation, that’s a major win for our climate, health and future. It’s also a win for Toronto’s soul-crushing congestion problem.

Is this climate change thing that big a deal?

In 1 word: YES. In a few words, Sir David Attenborough (of “Blue Planet” fame) said it best at COP24: “The collapse of civilisation and the natural world is on the horizon”. In many more words, see below. Grab a coffee (fairtrade, organic, natch) and get comfy…

There’s the Climate Transparency Report which works for “Ambitious climate action through country comparisons”. This really appeals to the competitive side of human nature. I hope it works as (spoiler alert) Canadians generate the most pollution-per-person in the G20 … triple the average GHG emissions for G20 countries. Not a proud moment.

There’s the 2018 Greenhouse Gas Progress Report “Climate Action in Ontario: What’s Next?” by the Environmental Commissioner of Ontario (ECO).

There’s the The Lancet Countdown: Tracking Progress on Health and Climate Change.

Canada’s Greenhouse Gas Indicators and more on the MOECC site.

And if you look Stateside, they’ve released the National Climate Assessment (even if their leader doesn’t buy it).

Is there a nutshell version?

Livin’ the COG-life (Coal, Oil & Gas, my fancy new acronym) creates the emissions that cause and worsen climate change. When Ontario closed coal plants 5 years ago, that took a big juicy chunk out of our emissions (and out of our smog days, which haven’t happened since). Yay! But we will stall on climate progress unless we look beyond electricity. Transportation is the next big hurdle.

After canceling Cap & Trade, Ontario has a new proposed Environment Plan. It looks strangely similar to what they did in Australia (which unfortunately saw more pollution, not less). The comment period is open until January 28, 2019.

OK, this is too big for me to deal!

There’s help out there, especially if you join a Green Team. Or go even further with Carbon Conversations, starting up again in February, with a January taster session! Put the cherry on the sundae and get there with your PRESTO card. 🙂 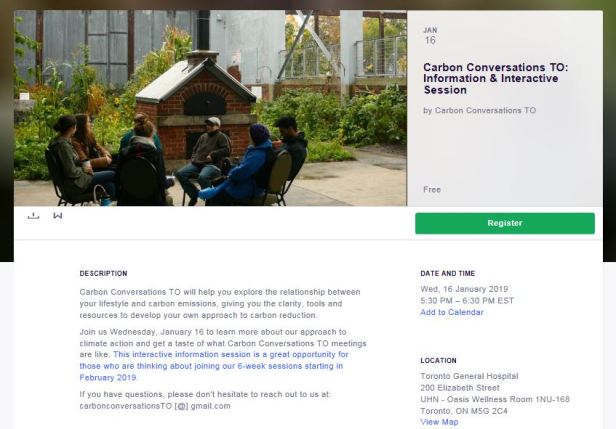 4 thoughts on “TTC VIP CHANGES – and the big picture”