You have to laugh. Laughter creates energy, breaks tension, and cuts big things down to size. We haven’t seen anything bigger than the climate crisis (climate change’s newer and more appropriately urgent name), so a little laughter goes a long way.

Unless you live under a rock (in which case, good for you for going off-grid!), you may have noticed a colossal Climate Strike around the globe last Friday. It was incredible! Though its roots are the #FridaysForFuture youth strikes by our new superhero, Greta Thunberg, every generation seemed to hear her call to action. 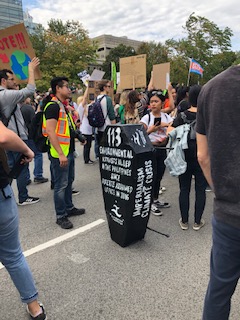 People of all ages, genders, ethnicities and musical preferences gathered at Queen’s Park by the tens of thousands. And they had a pretty clear and united message, delivered with a surprising level of humour and artistic talent. 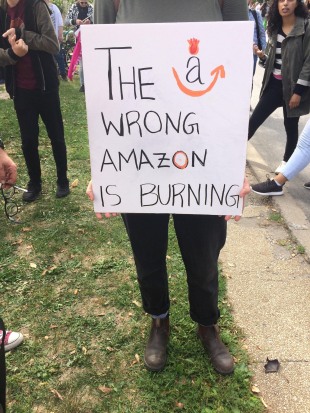 As for Greta, many were inspired by her words at the UN Climate Action Summit, 2019 (definitely worth watching!) 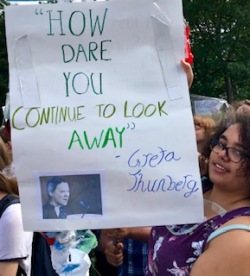 We don’t have time to look away. We are on the clock. As it says below, Canada is warming over twice the global rate (and the arctic part of Canada is going even faster). In a cold winter, that may sound lovely, but no.

Many protesters put the fossil fuel industry in the hot seat, for good reason. We’ve recently discovered they definitely knew about the dangers of their products since the 1980’s and earlier (back when I was younger than Greta). Instead of fixing it, they deliberately and systematically “misled non-scientific audiences about climate science” with a little tool called “advertorials” – paid advertising masked as news editorials. Yup, real fake news. 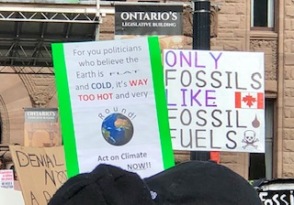 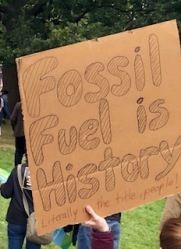 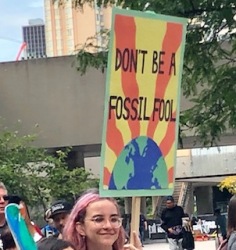 The oil, gas and coal industry took a page out of the tobacco industry’s playbook … deny, discredit, confuse … to buy more time so consumers could buy more product. Because of this, we are over 40 years late to the game and have a much steeper hill to climb. Like the Earth, that’s not cool. 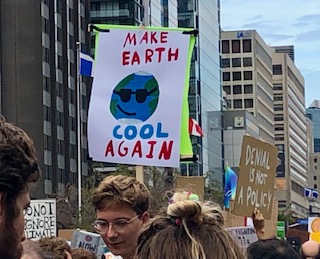 But climb it, we must. To paraphrase the Lancet, how fast and how intensely we transition to low-carbon living will determine the health of people and nations for centuries to come.

In the end, the Climate Strike was a real call to action. One day, one march may not fix everything, but it’s a start. We have a lot more power than we think.

P.S. if you’d like to start somewhere, here are 24 things you can do now.

One thought on “Who knew environmentalists were so funny?”