In honor of Remembrance Day, we’re remembering this from the archives…

As the 11th hour of the 11th day of the 11th month approaches, much of the world takes a moment to remember and respect. Many of us wear poppies to symbolize the occasion, and to raise a few loonies and twoonies for our surviving veterans. As a symbolic gesture, poppies are laid on the tomb of the Unknown Soldier.

We Canadians should be extra proud of this flower power in all its organic glory. Its link to Remembrance Day is all because of Canadian military physician John McCrae’s poem “In Flanders Fields”. Poppies bloomed across some of the worst battlefields of Flanders in World War I, and their deep red colour represented the bloodshed of war. They’re also steeped in irony that though the goal is to remember, the poppy’s medicinal power is to bliss out and forget.

I’m lucky enough to not know what it’s like to be at war. For other generations and other current nations, it’s an ever present reality. Not so lucky. So I’ll do this very small thing that’s asked of me which is to remember.

Both of my grandmother’s husbands fought in the WWII. In fact, they were in the same division of the air force (further proof of the world’s teeny, tiny preciousness). Her first husband passed on before I was born (the war didn’t get him, but the cholesterol count did), so I never had the chance to meet him. I did meet her second husband who shared some amazing war stories, slightly edited to protect his younger audience. We’ll never know what could not be said, a burden many returning soldiers bear.

My grandmother was a war bride, and had stories of her own. She knew what it was like to be a young woman in war-torn London. Lots of what we now call green concepts were the order of the day out of necessity. Blackouts at night to avoid the bombs = Class A energy efficiency. Food was rationed and every bit was used = the ultimate in waste reduction. 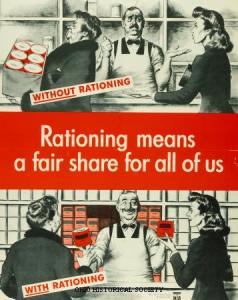 Because of the food rationing, many families were encouraged to grow “victory gardens”. Public property was converted into personal fruit, vegetable and herb gardens to ease the burden on farmers and to allow stocks to be sent to the soldiers. We still have that idea with our UHN GROW Garden. 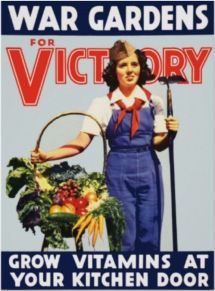 My grandmother told me that even items like ladies’ stockings were a rare commodity. Back in those days, they were held up by garters and had these dark seams at the back. For those without stockings but with a little artistic talent, they painted lines on the backs of their legs to fake-out the look. Quite the ingenious workaround. 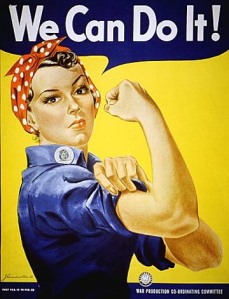 My generation has made some amazing technological advances, and we think we’re pretty smart cookies, but we could stand to learn a thing or two from the generations before. Part of remembering might be to engage someone who has lived through a bigger chunk of the past than you. You might be amazed at what they have to share.

Addendum 2019-11-11: The work we need to put into fixing the climate crisis is a lot like a wartime effort. ‘Business as usual’ will not fly. The difference with this war is we are all on the same side, whether or not we know it yet.